Image courtesy of David at www.pastztordavid.com - check out his site or visit him at facebook or over on Flickr

The above image is not one of mine but of a fellow member of a photography forum I frequent and thoroughly recommend (www.dyxum.com). It is a stunning image. Simple, well balanced with a strong background of perfectly vertical and horizontal lines overlaid with the soft brush strokes of vehicle head lights and tail lights painting the scene. The inclusion of the 'BUSZ' road signs help give context to the scene. It is an outstanding image and one that compelled me to write to the photographer (David) to congratulate him on such an image, to me a standout shot in an impressive gallery of dyxum 2012 'best ofs'.

In reply David thanked me and explained that the original image had been manipulated to deliver the vertical lines. Straight from the camera it had converging diagonal lines due to the angle from which it was shot, and in hindsight this is apparent due to the lack of shadow from any bridge that David would have needed to be positioned for such a shot.

Initially I felt the artistry of the shot had been slightly depleted by this revelation and knowing this affected my enjoyment of the image, albeit only marginally. But after thinking about it for some time, it is nothing more than an optimisation of the image. I followed up with David and asked if he would give me permission to use his shot above, and also to have the original photo. David very kindly gave me permission for both and so here is the original shot that David took:

Image courtesy of David at www.pastztordavid.com - check out his site or visit him at facebook or over on Flickr

There can be no doubt that this is a great shot, but David's vision that a 'better' image lay within - and ability to adjust it so - did indeed deliver a far more effective and visually appealing image.

Similar to David, a shot of mine of which I'm particularly fond of - and have received favourable comments from fellow photographers - is my shot below, 'implied windmill'. Most of the comments refer to the 'bravery' to have such a minimalist shot with so much negative space. 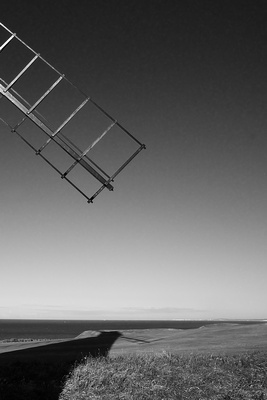 But as with Dave's stunning photo, this is not the image I took on that cool September morning in Brighton. I had decided to make one windmill blade my focus and to leave imbalance in the shot with an empty space to the right, but I was not as brave as the initial shot suggests. Instead, the original image was far broader; 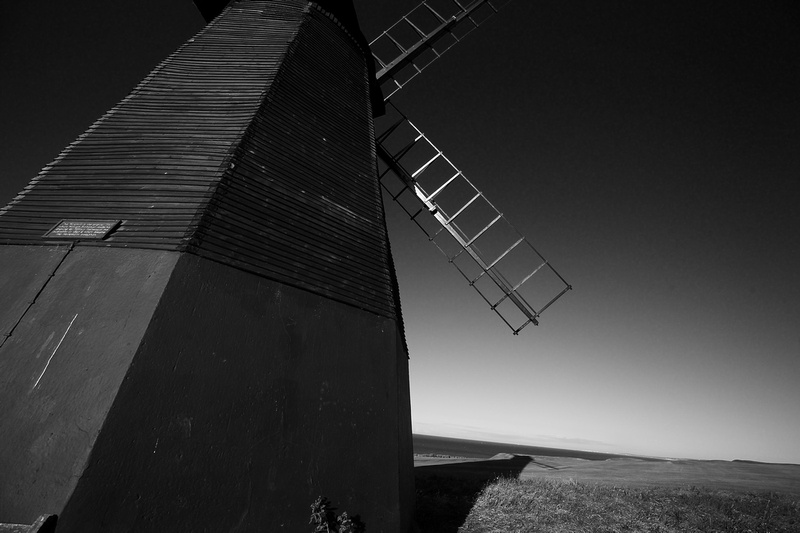 As shot, it's quite 'heavy' with too much emphasis on the building and too little emphasis on the blades. The serenity of the landscape is dominated by the base of the windmill and the whole scene leans uncomfortably down to the right and, in the case of the windmill, away and into the distance. So similar to David, I reviewed the photo and opted for several ways to optimise the image. Firstly, I straightened the horizon to remove the left-right tilt that occurred in the original. Secondly I looked to crop the image to increase the sense of contrast between mill and landscape that I wanted to capture.

But do you feel cheated that the image I finally published was not the one I had originally seen? Personally, I believe photography is a three part process;
1) a concept or an idea
2) a camera actuation
3) processing of the 'digital negative'

It's important to recognise this is not a new concept and an applied process to film photography as much as digital. The difference today is that the final step is both easier in digital photography and provides more options.

Please let me know you're reactions to the above as there are many degrees of editing (as partly covered in my previous post) and I find this whole debate fascinating. Personally the above two fall well within what I consider acceptable; in each case it is one image, optimised to deliver a stunning published image.

And finally, thanks again to David for allowing me to use his images in this post and sharing the original image which he previously hadn't published. Do head over to his site as he's a truly gifted photographer: http://www.pasztordavid.com. Also over on  facebook and flickr